Entry in a drawing to win one of 5 signed copies of one of Alice’s award-winning cookbooks!

If you live within 30 miles of El Cerrito, the Chocolate Kit will be delivered to you on Saturday, Dec 12th. If not, contact us directly at syeazel59@gmail.com by Dec 1st for mailing the Kit to you, at cost.

To register, please go to https://go.rallyup.com/chocolate 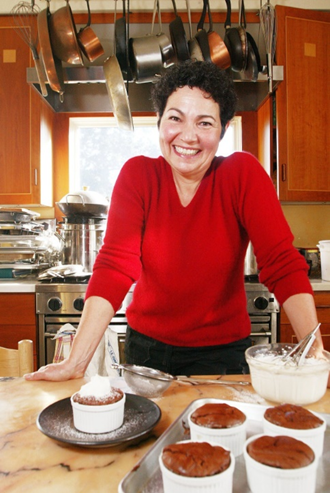 Author, pastry chef, and teacher, Alice Medrich is one of the country’s foremost experts on chocolate and chocolate desserts. Since 1976, when her renowned shop, Cocolat, opened and her first dessert feature (of many) appeared in a national publication, Alice’s innovative ideas and recipes and her insistence on quality ingredients have influenced a generation of confectioners, pastry chefs, and home cooks. Among her early accomplishments, Alice is credited with popularizing chocolate truffles in the US and introducing the larger “American” chocolate truffle, now a mainstream confection.

Since selling her interest in Cocolat in 1989, Alice has become an award-winning cookbook author, receiving three Cookbook of the Year awards from the James Beard Foundation and the International Association of Culinary Professionals for COCOLAT: Extraordinary Chocolate Desserts (Warner Books, 1990), Chocolate and the Art of Low-Fat Desserts (Warner Books, 1994); and BITTERSWEET: Recipes and Tales from a Life in Chocolate (Artisan, 2003). In 2007, Gourmet, Bon Appétit, and Food & Wine magazines named her Pure Dessert (Artisan, 2007) one of the top cookbooks of the year.